You Are Here:Home / History/Independent Peer Review

Despite ongoing, very successful water conservation programs, the Santa Fe region did not have enough drinking water to meet our current needs. Our current sources of water are groundwater wells that pump water from an underground aquifer and Santa Fe River reservoirs that hold runoff water.

We were overpumping the groundwater wells resulting in damage to the underground aquifer. Even in the best of years, the Santa Fe River reservoirs could only supply about half of the water our region needs. In very dry years, they cannot supply much water at all and emergency water restrictions have to be put in place. 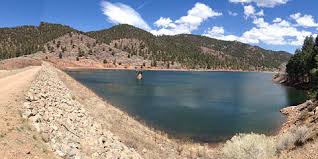 December 7, 2010: The ChemRisk final BDD IPR report, board response and public presentations are available for download.

The public has 7 additional days to provide comments.

The public has 30 days from October 15th to provide comments for the ChemRisk IPR team. Comments should be directed to Matthew H. Le, M.P.H. at MLe@chemrisk.com.  For a copy of the amended schedule, click here.

Update: ChemRisk presented a summary of preliminary results in the draft investigation report on September 30, 2010.
Click here to view the presentation.

Update: Due to the tragic sudden death of Thomas E. Widner, the principal investigator working on the Independent Peer Review for ChemRisk LLC, the schedule has been changed.
Click here for more information and to view the new schedule.

At the request of Water Quality Town Hall participants in 2008, the BDD sought funding from the U.S. Department of Energy (DOE) for an independent peer reviewer. A $200,000 federal grant from the DOE was received in fall 2009. The Independent Peer Reviewer, based on existing information, data and studies, will prepare an independent risk assessment regarding LANL contaminants with exposure through the drinking water pathway. That exposure and risk will be compared to other pathways of exposure to LANL contamination and public exposure to radiation and radionuclides of other origins, including natural background.

The RFP scope-of-services emphasizes public risk communication and includes a series of at least three public meetings. The RFP was published on July 17, 2009 and responses were due on September 16, 2009. Responses were reviewed by a panel including one public member, who was appointed by the BDD Project Board. On November, 5, 2009, the BDD Board approved a $200,000 contract with ChemRisk, LLC. For a copy of ChemRisk’s proposal, click here.

ChemRisk is a scientific consulting firm providing state-of-the-art toxicology, industrial Hygiene, radiological health, epidemiology and risk assessment services to a wide variety of organizations that confront public health, occupational health, and environmental challenges. ChemRisk scientists have been leaders in the independent investigation of historical operations at U.S. nuclear weapons plants. Since 1999, ChemRisk has been conducting the Los Alamos Historical Document Retrieval and Assessment Project for the U.S. Centers for Disease Control and Prevention. The team will include toxicologists, a physician advisor, health risk assessors, health physicists and an environmental statistician. For this project, ChemRisk will partner with AMEC Earth and Environmental, which has broad and in-depth experience in the hydrology, hydrogeology and geochemistry of New Mexico. AMEC has worked on projects throughout New Mexico including sites at Sandia and Los Alamos laboratories.

If the BDD Board has additional or unanswered questions or concerns at the conclusion of the work as described in the RFP and the resulting professional services agreement with the selected independent peer reviewer, it is possible that this work can be accomplished under an amendment to the initial agreement that DOE and LANL could potentially agree to fund.